Before turning to the Christmas festivities in Italy, I wanted to make mention of fall festivals in general and specifically the Festa del Tartufo Bianco (Festival of the White Truffle).  Beginning in late September you can find festivals for the wine harvest (see Il Carro Matto), the olive harvest, hunting of the wild boar and almost any type of  agricultural product imaginable throughout Italy.

The Festa del Tartufo Bianco in San Miniato al Monte, the last three weekends in November, celebrates the rare and expensive white truffle which grows in the wooded valley below the town.

I did a day trip to San Miniato with a group from my language school in Firenze, the second Saturday of November and loved the town and the festival.  From Firenze, you take the train on the Pisa line to San Miniato Basso (the newer town on the plains), then a bus to al Monte, a beautiful hilltop town with gorgeous views over the valley.  (The towns remind me somewhat of  Montecatini Terme and Alto (see Montecatini Terme post).

The instructor who accompanied us took us on a ‘passeggiata’ through the town and the various market areas where all types of local products from truffles to wine, meats and cheeses are displayed and sold.  Then he had us walk up a very steep hill to a tower, the Rocca di San Miniato.  It was worth the climb, though; you could see forever.

Afterwards we were on our own so I walked through the town again, checking out the various displays and generally absorbing the ‘flavor’ of the town.  A number of the restaurants offered pastas or other dishes with white truffles but they were far too expensive for me.  So I found a little trattoria and had one of the best calzones ever and my usual glass of wine.

As I walked back to the meeting point, what had been a bright sunny day  changed abruptly and the skies opened up. I took shelter at a gelato shop with some of the other students and our guide/teacher.  When the rain stopped, we started to walk to the bus stop and saw a beautiful rainbow stretching across the valley.

And as our train chugged back to Firenze, we saw rainbow after rainbow, several of them double.

I got my first hint that Italians are big into Christmas when I stepped off the bus in Sorrento on October 30th and saw a giant teddy bear dressed as Santa in the piazza across the street from the bus stop.  As I walked around the town over the next 2 ½ days I saw more and more Christmas decorations.

At the same time there were hundreds of parents and grandparents out with their children Trick or Treating on Halloween night.  Guess it’s a case of let no holiday go uncelebrated.

When I arrived in Naples on November 3rd, I found more lights and decorations as I walked around the city.  In the gallery below you can see the angels in front of the Duomo, street lights, a display in Galleria Umberto, and a presepe  (Nativity Scene) in the church of Santa Brigida next to the Galleria.

And presepi are what Napoli is all about.  Despite having read my Naples travel book cover to cover, I somehow didn’t see that information.  If it hadn’t been for a lovely couple in the apartment next to mine who invited me in for coffee before they left for Trevino, I would have missed out on a beautiful part of Naples.  The husband wrote down the list of places to go including, San Gregorio, presepi.  I thought he meant that there was a church by that name with a nativity scene.  So my first afternoon I wandered all over looking for it.  Not finding it, I did some research and realized that San Gregorio Armeno is a street (via) of Christmas shops with beautiful handcrafted ornaments and figures for nativity scenes.  I found the street my second afternoon and loved it, going back the next day to buy a gift for my sister.

I have to add that one aspect of via San Gregorio doesn’t make a lot of sense to me.  Almost every Christmas shop has the ‘cornicello’ or ‘curnicello’ in every possible size and design right next to the presepi and Christmas ornaments.  The ‘cornicello’ looks like a red pepper and according to this website https://italian-traditions.com/cornicello-traditional-lucky-charm-from-naples/  it goes back to Neolithic times and represented the cult of fertility in Greco-Roman times.  Neapolitans believe it has special powers of luck, so I bought one and so far it’s not working.  But having a figure that represents pagan mythology right next to Christian symbols seems totally incongruous to me.

My first taste of the holidays in Firenze came on November 19th.  It had been a spectacularly beautiful day so after classes, I walked all around the city from Piazza della Signoria to Piazza del Duomo, and back to the Arno, taking pictures.  From the Arno I walked up via Verde past Piazza Santa Croce and saw that they were setting up tents for the Christmas Market.  The next day I came back after a trip to Fiesole and the market was in full swing.  I wrote in my journal: ‘Mama mia!!  The food!! the beautiful handmade gifts!!’

I returned multiple times over the next 2 ½ weeks, buying some small ornaments from the shops and just enjoying the vibe and occasionally the music.  There are dozens of food shops, handmade goods of every type, ornaments, clothing…..  Some of the shops are Italian, others are Austrian or German and there was even a shop from Scotland.

On November 21st  I was so excited after moving from a hideous school apartment to a VRBO apartment that I decided to treat myself to dinner at a little osteria near Palazzo Pitti.  My new apartment was about a mile east of the Ponte Vecchio, so I walked along the Arno to the bridge and then up via Guicciardini to the piazza.  When I got to the Ponte Vecchio, I realized there were Christmas lights on the bridge and all the way up the street to the piazza. 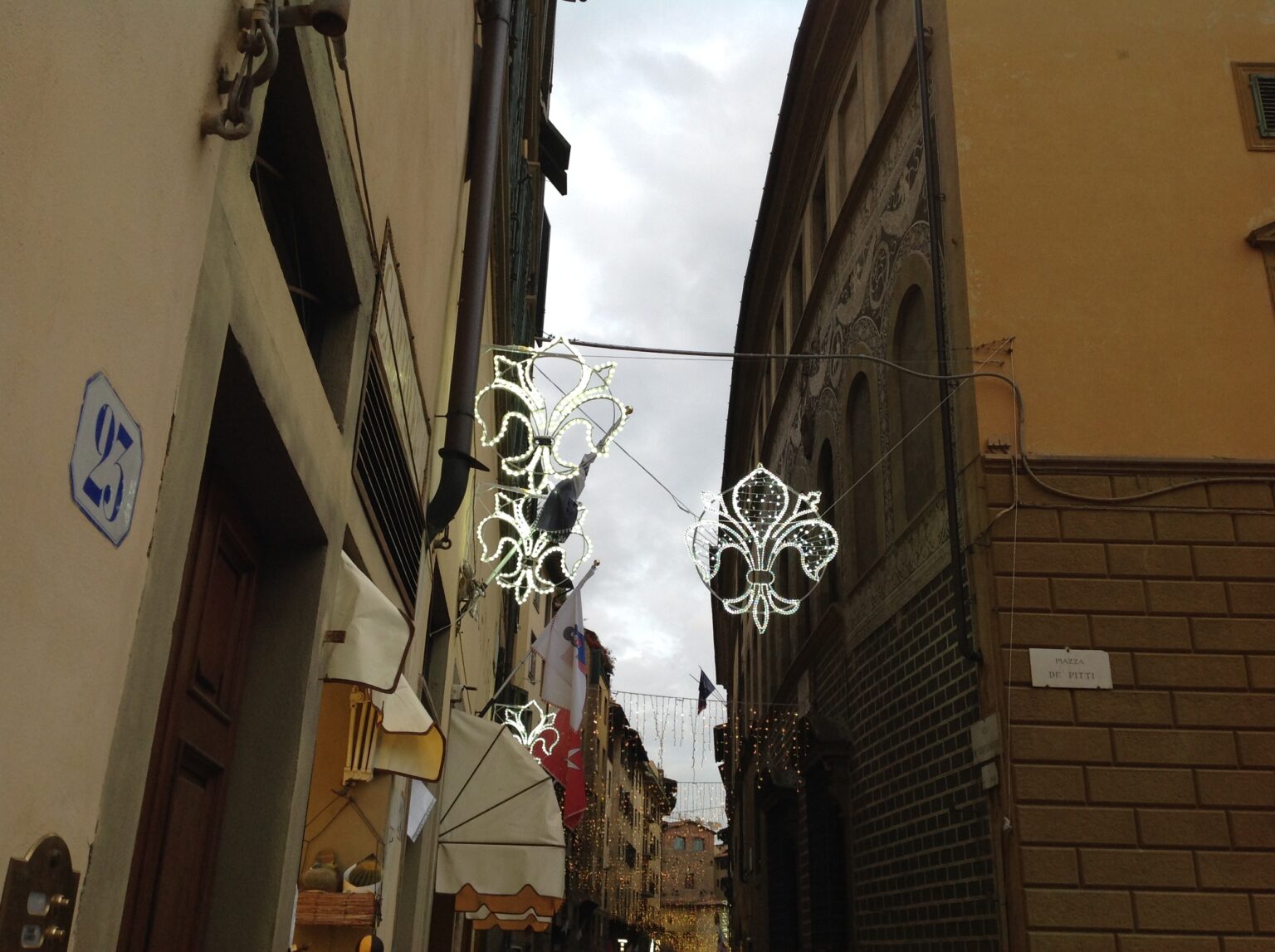 Lights near the Ponte Vecchio

Every day after that I found new sights and sounds of the season.  One of my favorite days was November 30th.  I was done with my language classes and it was a beautiful day so I first walked up to Orsanmichele to visit the church and the museum plus buy a ticket to the Uffizi Galleries for later in the week.  From Orsanmichele I wandered through Piazza della Repubblica, stopping to watch and take a video of a street band, and then to Piazza del Duomo where I could see workers putting up the huge Christmas tree.  I started down a side street and came across a group of people in Renaissance costumes, some with drums, others with trumpets or flags.  Being the clever person I am, I figured something was afoot.  So I waited for 15-20 minutes taking pictures whenever I could get a good shot.  Then suddenly a huge entourage of what appeared to be dignitaries carrying banners from different ‘communes’ entered the street, led by police officers carrying a large wreath.  After the dignitaries had passed, the people in costumes fell in behind.  I thought the procession would lead to some type of ceremony in the Piazza del Duomo related to the Christmas tree but the people passed through the piazza continuing down via Calzauoli. 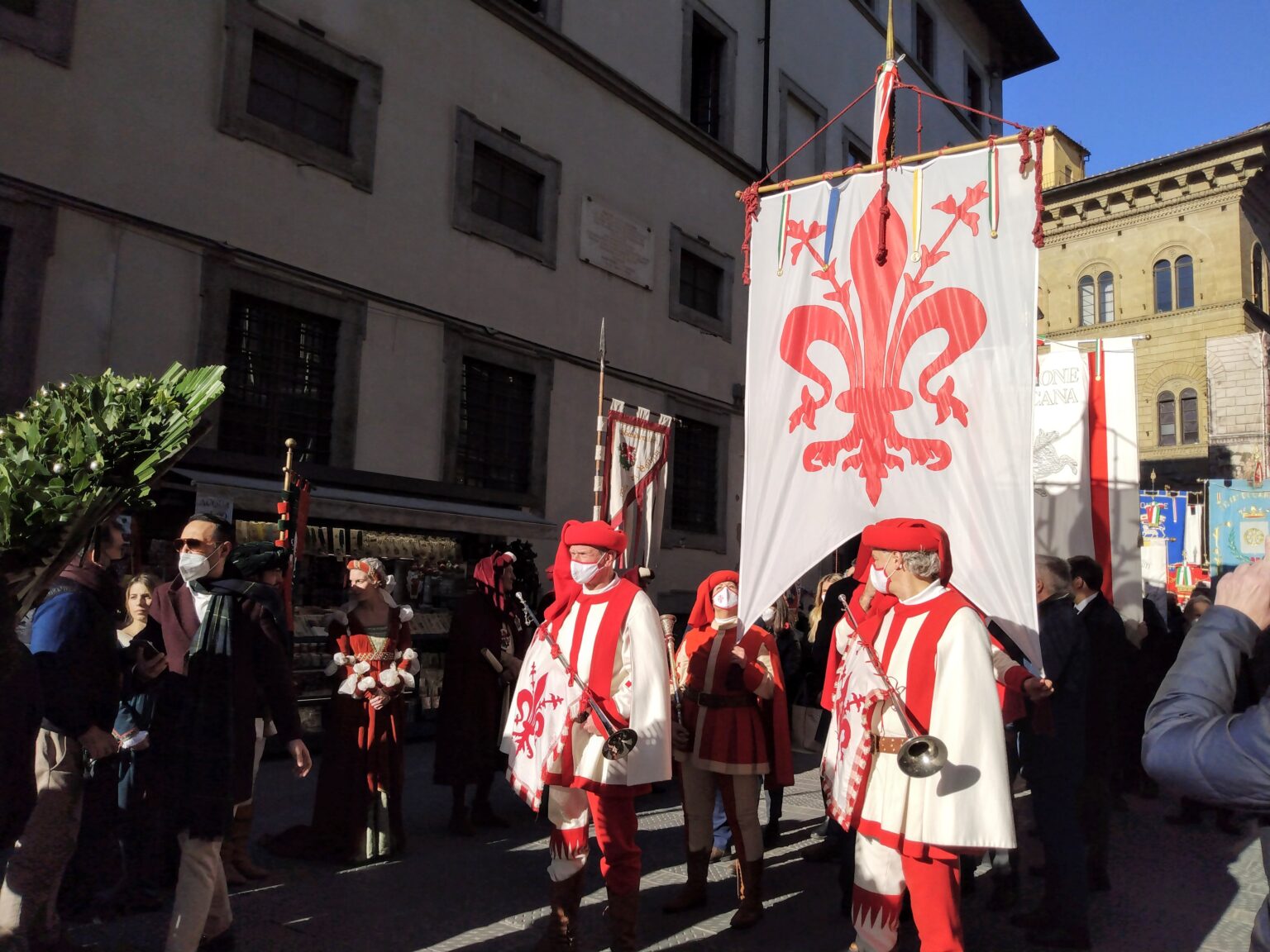 Over the next few days, as I wandered about going to museums, I tried to take pictures of the lights over the streets but neither my iPad nor my phone really caught the beauty.  Here are a few samples from both day and evening.

I did get fairly good pictures of the lights on the Rinascente store, which is just across from Piazza della Repubblica, on via Calimala.  It has one of the most spectacular light displays I’ve ever seen, constantly changing colors and shapes. 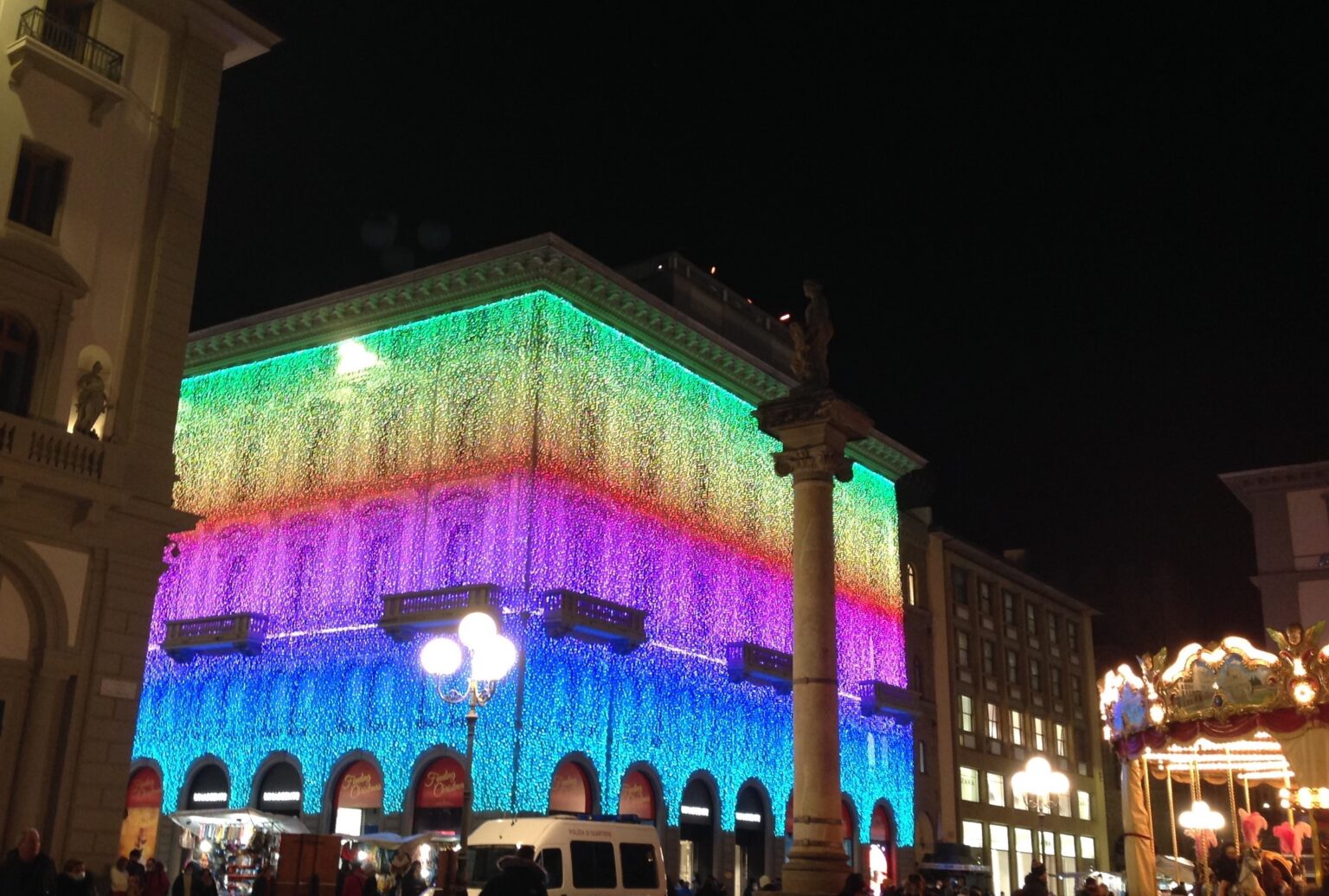 The trees in Piazza del Duomo and Piazza della Repubblica were lit the evening of December 7th and they were incredible. 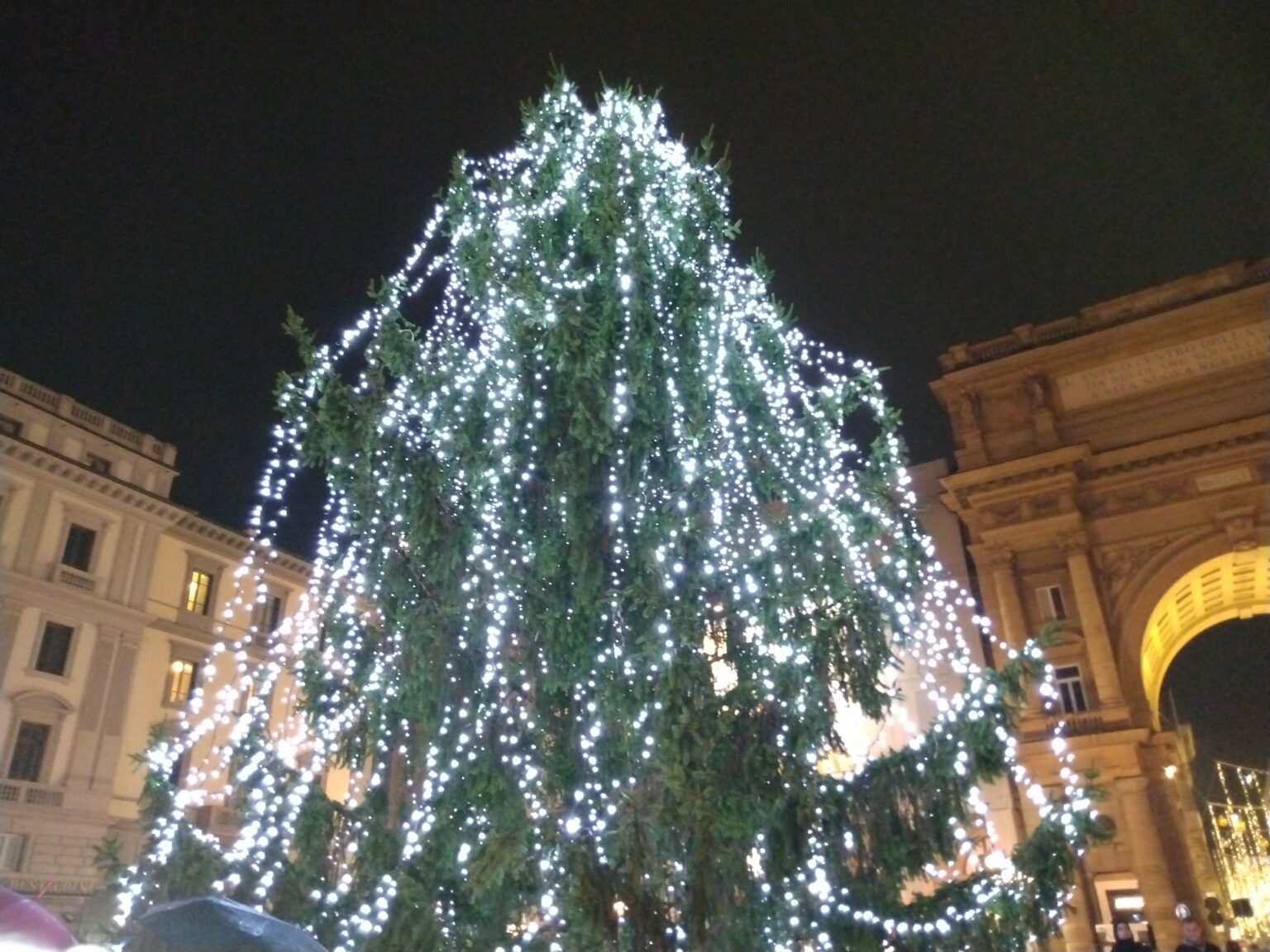 It was chilly and damp that evening so I hustled back to my hotel near Mercato Nuovo.  Just as I got in my room I heard trumpets and drums.  I leaned out my window and could see the procession returning from Piazza del Duomo to Piazzette Parte Guelfe.  The pictures below aren’t great but still give the reader a feel for the celebration.

Procession after the lighting of the Christmas tree

The Feast of the Immaculate Conception on December 8th marks the true beginning of the holidays in Firenze.  And for the past few years it has coincided with the Firenze Light Festival.  This year’s theme was Reflections and seemed a bit subdued compared to other years.  There were light shows on Basilica San Lorenzo, the Ponte Vecchio, Museo Galileo and a building across the piazza from Museo Galileo.  Again, I don’t think my photos capture the true beauty but hopefully enough so that the reader has an idea of how gorgeous they are.

I definitely recommend seeing Italy during  the holidays although Firenze and northern Italy can be rainy and chilly.  If that doesn’t sound appealing, you might consider Rome or some of the towns and cities in the Puglia.  (see Ostuni and the Puglia post)