I’m not sure I can explain how we ended up in Bologna for our first two days of our 2018 Italy trip without making readers’ eyes glaze over.  Over the years I’d read that Bologna and Emilia Romagna, in general, had become something of a culinary destination.  Plus I was fascinated by the fact that Bologna’s university is the oldest in Europe and one of the most prestigious.  Also in the fall of 2017 I met a guy at my language school (Istituto Michelangelo, see my Istituto Michelangelo, parte uno and Istituto Michelangelo, parte due posts) who said he was going to continue his studies in Bologna which piqued my interest  But in all honesty we kind of backed into it.  As I mentioned in my Sixteen Hours in Istanbul post, we (my sister and I) made our travel plans later than usual and after deciding to use Turkish Airlines with a layover in Istanbul, the difficult decision became what city in Italy to fly to from Istanbul.

Before we made our flight reservations I gave my sister two different suggestions for itineraries; going to the Puglia where I’d been once before or trying to see some of Umbria.  My sister chose Umbria because she wanted to go to Assisi.  So Bologna seemed like the logical city for our flight from Istanbul since it has a major train station and I thought we could get most anywhere from there.

So here’s what I wrote after nearly 2 days of travel: Tuesday, September 18, 2018, 10:30pm:  Holy crap!!  That was a crazy day!!  We’d almost given up on our bags after an hour and a half when they finally showed up.  We cabbed it to Aemilia where, thank god, our room was ready.  We freshened up a bit unpacked a bit, then walked to the centro.

One of the few good decisions I made for this trip was choosing our hotel in Bologna; Hotel Aemilia.  It was the only hotel of the trip whose online pictures and information were accurate plus it ticked all the boxes; an easy walk to the centro, clean and modern, a good restaurant, nice staff and best of all two lovely terraces–one next to the bar and the other on the roof with beautiful views of the city

Once we had made our travel decisions (sort of, since they kept changing) I started researching the major sights in Bologna–Torri degli Asinelli e Garisenda, the Asinelli being the fourth highest tower in Italy, Piazza Maggiore, Piazza Nettuno and the ‘666 portici.’  The latter intrigued me.  One site described them as terracotta arcades and tried to explain them as related to the expansion of the university.  On our first day we walked from the hotel through Porta San Vitale and then up the street of the same name.  As soon as you enter the centro almost every street has the covered walkways or loggia and I honestly couldn’t figure out the connection to the university.  In some areas they are very pretty as you can see in the gallery below but in many areas they are covered in graffiti.  Tagging is a major issue throughout Italy but typically is limited to the train stations or more industrial areas.  To see it in an historical area with no apparent effort to clean it up was extremely disappointing.  But the portici are definitely worth seeing. 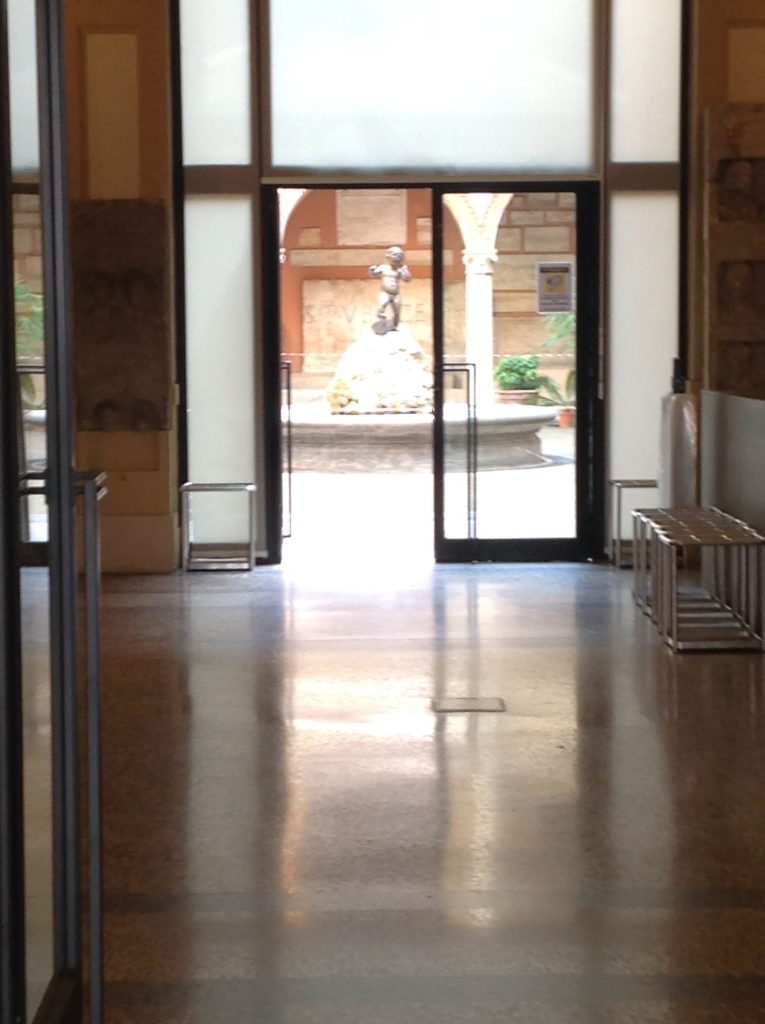 Going back to the towers and main piazzas, what surprised me the most is that after walking several blocks through the portici, the towers seemed to spring out of the surrounding buildings.  It took us several minutes to realize where we were and what we were seeing.   Piazza Maggiore has a different feel–at least to me–than the major piazzas in Firenze or Siena, for example.   The piazzas in those cities are always crowded and are surrounded by restaurants and shops.  While there is a restaurant along one side of the Piazza Maggiore, the other side is taken up completely by the church of San Petronio.  Plus Piazza Nettuno doesn’t feel like a separate piazza, more like an extension of Maggiore.  It was difficult to get photos that really captured the beauty of the towers and surrounding buildings but hopefully the gallery below gives the reader a feel for the piazzas and towers.

Piazzas and towers of Bologna

Before our trip I also researched some of the churches in Bologna, knowing that my sister would want to see the major ones, San Domenico and San Petronio.

On our second day we headed out to see the churches and here’s what I wrote: Wednesday September 19, 2018 5:00pm:  Holy [expletive]!!  A nearly 15k step day!!  Mostly ‘cause I took us the wrong direction after going to the bank.  We wandered all over and I was totally disoriented but finally got us into the centro and to San Domenico and San Petronio, both of which I found fairly underwhelming. And I wrote underwhelming because neither had the beauty of the Duomos of Siena or Firenze or the interesting history of churches such as Santa Croce in Firenze where you can see the tombs of the Medicis, Dante, Galileo and Machiavelli, to name a few.

My DK Eyewitness Italy 2015 says that San Petronio ranks among the ‘greatest of Italy’s brick built medieval buildings’, an odd turn of phrase, I thought.  But it is interesting both architecturally and historically.  As mentioned above it forms one entire side of Piazza Maggiore.  While I have seen churches to which facades have been added in later years, such as Santa Croce in Firenze, I can’t think of any other churches that have an ornate marble façade on the lower half of the front and unfinished brick on the top half.  According to historians this is because funding was withdrawn when Rome learned that the builders planned to construct a church larger than St. Peter’s.  Eyewitness calls San Petronio’s Gothic interior airy and its columns graceful and I agree with that description.

I couldn’t find a lot about San Domenico in my travel guides, other than it is the burial place of St. Dominic.    I liked the interior more than that of San Petronio, although I can’t really articulate why. If you look carefully, you will see early works by Michelangelo.

I was also interested in seeing the university area in part because one of the websites on Bologna said it was a lively place to hang out; maybe for the students but not so much for two women wandering around alone.  After visiting the churches and going to the train station to get tickets, here’s what I wrote: We then headed to the university area.  I did pretty well navigating until I got to a street near the university and couldn’t figure out whether to go left or right. So–exhausted and hungry–we sat at a little Greek restaurant for lunch and had insalata greca, spanakopita, beer and wine.  The manager (?) showed us where we were  on my map and we found our way back to the Asinelli towers, after a short detour through the old Jewish ghetto, then back to the hotel.

Street scenes near the University of Bologna

On our first day in Bologna, I wrote: We strolled around Piazza Maggiore and Nettuno, taking photos then found the little lunch spot–Salumeria Simone–that I’d seen on TA where we had a huge platter of meats and cheeses plus wine. Salumeria Simoni is very small and most of the seating is outside which we always enjoy.  Our waiter was extremely nice and the food was terrific–a huge platter of meats and cheeses plus reasonably priced wine.   As is typically the case in Italy we were able to sit and people watch for as long as we wanted plus we got serenaded by a ‘street band’ which was very fun.  Here are a few photos of Salumeria and the musicians.

At the end of our first day here’s what I wrote: After a (free) pre-dinner spritz in the bar, we ate dinner in the hotel restaurant and my risotto gamberi and insalata mista were outstanding.  As usual I embarrassed myself with the waiter. [As an aside he wasn’t very friendly initially, although he stood and talked with the couple next to us for quite some time.]  When he brought over a bottle of wine, I said, ‘We just ordered a glass.’  ‘I know.  I needed a new bottle.’  He finally was a little friendlier when he brought the check to me to sign.  ‘The room is in my sister’s name.’  And he said to Sue, ‘Oh you’re the bigger sister.’  Sue responded with, ‘I prefer older sister,’ giving us all a laugh.  We finished with a limoncello on the rooftop terrace where Sue took some lovely photos of the skyline.

My only minor complaint with the hotel staff was their recommendation for dinner our second night.  We wanted something nice but fairly close and the concierge recommended Osteria Broccaindossa, on the street of the same name just inside Porta San Vitale.  We thought it was mediocre at best with fairly sketchy service. That said, as you can see in the pictures below, we had fun, continuing with what a friend described as eating and drinking our way across Italy.

Afterwards I wrote: once again I took us the wrong direction after we left the osteria and we had to backtrack at least 6 blocks; a recurring theme of this trip.  Sheesh!!

I’m not sure I’m drawn to see Bologna again but I’m definitely glad I got to see it once.