I’ve been fortunate to see Il Carro Matto twice, in 2017 and 2019.  I initially found information about it at visitflorence.com before attending Istituto Michelangelo  in 2017, realizing it was scheduled for my second Saturday in Firenze.  When I signed up to attend Istituto Michelangelo in 2019, it occurred to me that I would again be in Firenze for Il Carro Matto, which is  on the last Saturday of September.   The name means ‘Crazy Cart’ and the festival celebrates the wine harvest.

The procession begins in Piazette di Parte Guelfa.  I think the best way to find the piazzette is to walk to via delle Terme just north of the Ponte Vecchio.  Then, as you start walking west, keep looking to the north (to your right) and you’ll see a narrow street that I’m not sure has a name.  Follow it and you’ll come out in the small piazza.  There’s an Irish pub on one side, some medieval to Renaissance era buildings on the south and west side.   Just north of the building where they keep their equipment is a loggia and then another bar or restaurant with outdoor seating.

I enjoy watching the parade preparations. Both in 2017 and 2019 I sat on the steps of the building on the west side of the piazza to watch. This past year a man came up to me speaking rapid fire Italian, trying to explain the history of the festival.  After a week of language school I could understand about half of what he said.  Around 3:00 pm or a little before, members of the organization that performs the procession (and I’ve looked everywhere for the name of the group) start arriving, typically in groups of twos and threes, carrying their duffel bags, laughing and talking and usually smoking.  They walk up some stairs at the south end of the piazzette, change into their Renaissance costumes and then come back down.  It’s great fun to watch and here are some pictures from both years.

Between 3:15 and 3:30 pm, the participants, start organizing into groups–the drummers, the trumpeters, the flag carriers and pipers.  There are a few women who walk at the front of the parade and also a few men who pull a small cannon.

The start of il Carro Matto

They march very slowly from the piazzette past a couple of cafes to the first corner then turn right on via Porta Rosa just south of Palazzo Davanzati to via Calimata where they turn left.  The procession continues past Piazza della Repubblica where the street becomes via Roma.

Via Roma ends at Piazza del Duomo where the parade meets il Carro Matto (the crazy cart) pulled by two white oxen and loaded with typical Chianti wine bottles wrapped in straw.  Several women, dressed in what appears to be costumes typical of the countryside, accompany the cart.  In ‘2017’ the procession met the cart just south of the Duomo and I was able to see the meeting.  In 2019, however, the cart went around the north side of the Duomo and met the procession between the Baptistry and the Duomo.  Even standing on some steps I couldn’t see anything which was disappointing.  Here’s a gallery of the ‘meeting’ in 2017. 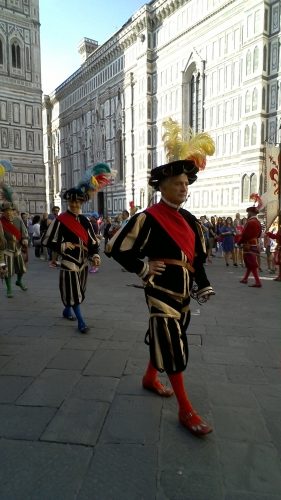 Once the parade and il Carro Matto meet, they receive a blessing then continue to Piazza della Signoria.  In 2019 I waited for the procession to march down via di Calzaiuoli (I think) to the piazza.  After following for 2 or 3 blocks and taking pictures and videos, I cut over to a street parallel to the parade and hustled to Piazza della Signoria.

I had arranged to meet some friends from school in the piazza.  Unfortunately I told them to meet me  near Caffe Rivoire and the parade went on the opposite side of the  piazza.  I was really bummed because the ‘flag throwers’ (Banderai degli Uffizi) began tossing their flags and I could barely see them above the crowds.  I took some pictures and video but most of the view was blocked.  You can just make out the flags and il Carro Matto in the gallery below.

In any event, it’s interesting and great fun.  If you happen to be in Firenze the last Saturday in September, I  highly recommend going.

One thought on “Il Carro Matto”